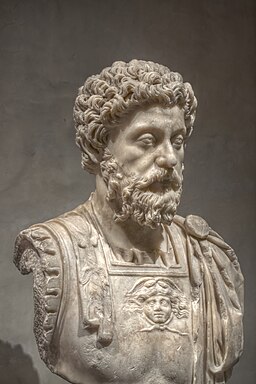 In case you think that our modern society is in some way the pinnacle of self-help, psychologically-aware, affirmation-spouting gurus… think again.  We are simply repeating over again that which has gone before us.  There will be others, but as I warned in an earlier post, here is my favourite quotable guy – Marcus Aurelius.

Never heard of him?  He was a Roman emperor from the second century CE.  He is also considered one of the great Stoic philosophers.  You can read a bit more about him at Wikipedia.  His series of personal writing has come down to us as his Meditations, of which I own a lovely hardback copy.

Take a look at some of his observations, I’m sure you will be able to see the source of our modern echoes.

As our modern abundance gurus tell us these days – focus on what you have, not on what you don’t…

“Everything that exists is in a manner the seed of that which will be.”

“Begin – to begin is half the work, let half still remain; again begin this, and thou wilt have finished.”

Who knew Mary Poppins was channelling a long dead Roman dude?  “Our first game is called Well Begun is Half-Done.”

“Confine yourself to the present.”

Take your pick of mindfulness gurus with that one.  Focus on the now, not the past nor the future.  Good advice no matter what century it’s coming from.

“Execute every act of thy life as though it were thy last.”

I believe you might recognise that in it’s modern paraphrasing of, “Live every day as though it were your last.”

“Look back over the past, with its changing empires that rose and fell, and you can foresee the future, too.”

Also known as: history repeats itself.  We know mate, your own writings prove that ideas are on their own historical cycle never mind the shifting of empires!

“Very little is needed to make a happy life; it is all within yourself, in your way of thinking.”

Your mind is all-powerful, and it’s the key to your own happiness.  Really good advice, and well worth pursuing.

If ever you were in doubt about the value of studying history, let Marcus Aurelius set you straight on that one.  The values we get and learn from such incredible minds as the early philosophers are well worth the effort of exploring the past.  Their observations are often just as applicable to human interactions now as they were when first thought of and written down.

I hope I have piqued your interest in reading more of this interesting man’s writings, and that perhaps you will also look at other philosophers too.  There’s plenty to choose from, with lots of wisdom to ponder.

This site uses Akismet to reduce spam. Learn how your comment data is processed.

We use and love:

What we talk about...